Skip to Content
Home / Lifestyle / YOU ARE A GUEST TOO

As the maids were moving around to set the table, so also were the guards making sure there is enough security in the palace. People are seen moving here and there. Hands are on deck. The beauty of the palace cannot . The guards are properly positioned by the king’s sides.

The D-Day is here.

Today is the day the King will be receiving his quests at the palace.

“Are the dishes and cups cleaned and ready for use?”

“What of the towels to be used?” Instructions are being given out to the servants of the palace.

The king had announced to all the workers in the vineyard that he will receiving some important visitors.

The aroma of different delicacies filled the entrance to the pathway where Olayemi was properly seated to receive the guests as they come in was enough to give the impression that the party has started already.

“You are welcome sir. The king is excited to have you at the palace”. Olayemi greeted Mr. A with a smile as he gently collected the suitcase and led the guest to the table. The hands of wealth can be well seen in the appearance of Mr. A.

“The King really did a good work of selecting the guest all by himself”. Olayemi thoughts to himself. “He chose the right people from the right calibers to be present. I can proudly say that every guest that has arrived here today is worthy to be here”.

Within a twinkle of an eye, the tables prepared had been filled up.

“I am sorry, Your Excellency, I don’t drink coffee” The man dressed in plain shirt and trouser said aloud as soon as the maid began serving.

Before he got to sit down, a young woman spoke aloud to no-one in particular. “My best drink is Tropical wine. I’d liked to be served a glass of my best drink.”

At the extreme of the dining table was a man who was not properly dressed for the kind of the dinner, his hands were raised up. ” Please sir, I will eat and drink whatever you give me”.

Olayemi’s fist folded and were tightened as he watched the shameless and mannerless people the King had called as his guest. They should have known that they have no right to dictate what to eat or not. Whatever the King has to offer them, they have to do his biddings whether they liked it or not.

If only His Highness had allowed me to prepare the guest list, I would have crossed off some names that have no place here in the palace.” He said to himself as he paced the entrance of the door to the dining room.

Do you know that we all have been at Olayemi’s position at one point or the other in our journey of faith?

Many at-times, we try to set a standard for whosoever that must come to the presence of God. Romans 14 admonishes us to welcome everybody with open arms. Do not criticize. Do not condemn.

We all have different opinions that are responsible for what we do or think. Some people’s faith allows them to wear earring while other not. To some, they are allowed to put on trousers or jewelries while others are not allowed to.

We all have different opinions that are responsible for what we do or think.

They are all God’s guest at His dining table. If He has accepted them, who are you to condemn or discriminate.

Besides, it will be terribly rude to criticize what His guest are doing or not.

It’s God we are answerable to – all the way from life to death and everything in between – not each other. Let’s forget about deciding what’s right for each other. Instead be concerned that you don’t get in the way of someone else’s salvation.

For the Kingdom of God is not a matter of what we eat or drink, but of living a life of goodness and peace and joy in the Holy Spirit. If you serve Christ with this attitude, you will please God, and others will approve of you, too. So then, let us aim for harmony in the church and try to build each other up.
Romans 14:17‭-‬19 NLT

It’s not in your responsibility to change anybody or choose a standard.

Leave it to God to decide.

It is God who called us together, not you. He who has brought us together already declared that there is no condemnation in Christ Jesus. 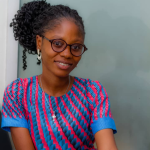 No to Sexual Immorality !!!

MY LESSONS FROM THE MOVIE – FINDING THE ONE